This is a (very) short paper that I will be presenting at Internet Research in Denver this week. I want to write something longer about the story because I feel like it represents in many ways what I see as emblematic of so many of us who lived through our own Internet bubble: when everything seemed possible and there was nothing to lose. This is (a small slice of) Drork’s story.

Abstract This paper concerns the rise and fall of Wikipedia editor, ‘drork’ who was blocked indefinitely from the English version of the encyclopedia after seven years of constructive contributions, movement leadership and intense engagement. It acts as a companion piece to the recent statistical analyses of patterns of conflict and vandalism on Wikipedia to reflect on the questions of why someone who was once committed to the encyclopedia may want to vandalize it. The paper compares two perspectives on the experience of being a Wikipedian: on the other hand, a virtuous experience that enables positive character formation as more commonly espoused, and alternatively as an experience dominated by in-fighting, personal attacks and the use of Wikipedia to express political goals. It concludes by arguing that the latter behavior is necessary in order to survive as a Wikipedian editing in these highly conflict-ridden areas.

Recent scholarship has painted two competing pictures of what Wikipedia and Wikipedians are “like” and what they are motivated by. On the one hand, Benkler and Nissenbaum argue that because people contribute to projects like Wikipedia with motivations “ranging from the pure pleasure of creation, to a particular sense of purpose, through to the companionship and social relations that grow around a common enterprise”, the practice of commons-based peer production fosters virtue and enables “positive character formation” (Benkler and Nissenbaum, 2006). On the other hand, we have heard more recently about how “free and open” communities like Wikipedia have become a haven for aggressive, intimidating behavior (Reagle, 2013) and that reversions of newcomers’ contributions has been growing steadily and may be contributing to Wikipedia’s decline (Halfaker, Geiger, Morgan, & Riedl, in-press).   END_OF_DOCUMENT_TOKEN_TO_BE_REPLACED

Below is the research proposal that I wrote when I applied to the Oxford Internet Institute (OII) DPhil Programme in November last year. I’m guessing it’s going to evolve some (especially since I’m wanting to add some statistical work surrounding citations and translations between languages), but I’m really excited about it as it stands. The wonderful Dr Mark Graham is my supervisor at the OII and I’m lucky to also have Dr Chris Davies as my college advisor (I’m at Kellogg College here). Thank you to the OII for putting me forward for the Clarendon Award and to one of my heros, Bishop Desmond Tutu, for inspiring part of the award that got me here. Thanks, lastly and mostly, to Dror for inspiring me 🙂 With all these thanks it sounds like I’m at the end. But it’s only the beginning. I’m looking forward to comments and suggestions on how I might discover the answers to this question. I think I’ll certainly hear them in the months and years to come.

Abstract: Wikipedia is, in many ways, the poster child of the Internet Age. It has been singled out as the ultimate working example of the collaborative power of the Internet (Shirky, Tapscott) and what Yochai Benkler calls ‘commons-based peer production’ to describe how the Internet has created radical new opportunities for how we make and exchange information, knowledge, and culture (Benkler, 2009). Part of its popularity comes from its power to influence and inform. As the sixth largest website in the world, with over million users and 90,000 active editors, Wikipedia is becoming one of the most influential reference works in history.

For every broad statement about Wikipedia, however, there are examples on the ground that hint at an alternative reality. The ideal that commentators (many of whom are not involved in editing the encyclopaedia on a daily basis) project is of a unified group of rational, detached, individual editors building a neutral, free encyclopaedia that is “the sum of all human knowledge”. But the organic nature of the encyclopaedia, its culture, politics and architecture have produced and continue to produce an encyclopaedia in which particular tactics, identities and relationships, many of which are in defiance of original rules, often prevail over reasoned and rational dialogue. Wikipedia still has a number of “dark spots”: from uneven geographies of articles written about places (Graham, 2011), to low numbers of female contributors (Lam et al, 2011) and vastly different levels of quality (Duguid, 2006). But there are other dark spots too – spots within the encyclopaedia itself: knowledges that are silenced, perspectives that are marginalised and people that are banned.

Who wins and who loses in this open environment? How do culture, politics, regulations, architecture and identity influence who wins or loses? And what does this mean for the way we think about online collaboration, its power and pitfalls? END_OF_DOCUMENT_TOKEN_TO_BE_REPLACED 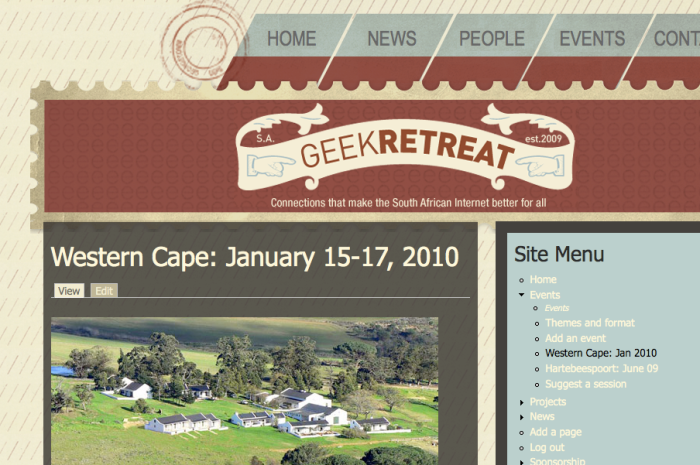 As part of the new GeekRetreat at Stanford in the Western Cape, the fabulously talented Jackie Scala (Scala Designs) volunteered her time to develop a new shiny home for the GeekRetreat. Guy Taylor (Telamenta) took Jackie’s design and built a Drupal implementation around it (helped by Noto Modungwa and Skip). We’re slowly starting to find jobs for ourselves as the GeekRetreat community matures. We have a small team working on ‘public relations’ and there are individuals working on sponsorship, nominations and helping out to develop themes and content areas on the wiki.

After working on this kind of self-organising community work for so many years, I still feel that it’s a process with very few rules, and that each time I do this, I feel like I have to start from scratch. So this time, I’m trying to build a process that someone else could follow. It’s not easy, because it seems like every new event will be different, but I’m really determined to at least get some of the way by building templates for invitations, processes, and communication.

It’s been fascinating watching the DrumBeat community at Mozilla go through a similar process. I feel like there is so much great research to do on analyzing these communities and finding easier ways of getting things done in decentralized groups. Maybe *that* would be a good follow-up for GTD in the brave new world of online communities 🙂