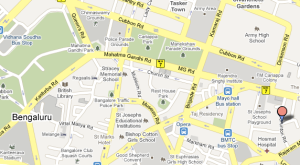 I set out for food and adventure after arriving at my hotel earlier today and passing out in the kind of drunken stupor only possible when flying half way around the world. Ramanashree Hotel is about 50m away from the renowned ‘MG Road’ (I don’t know much about it but it conjures up images of wide boulevards and people drinking beer on pavements).

I turn left onto the main drag and have to ask a couple of people to confirm that I’m actually here. It’s not quite what I expected. I stumble along what looks more like a bad tetris game than an actual pavement. To my right is a road over which uncountable numbers of auto rickshaws, taxis and other methods of transport fly. Their flying is accompanied by the very unmelodious hooting by the same. I wonder how hooting makes any difference when everyone is hooting… all the time. I guess driving in India is about understanding that we are all held in suspension in a kind of cosmic, dynamic fluid. We alert one another to our presence in the fluid by letting one know where we are. Perhaps this means that blind people can drive in india too…

I continue along the pavement, keeping well to the left. Apparently there isn’t a clear boundary between the main road and the pavement. This doesn’t deter the locals. Although it is dark and the cars are hurtling towards them, people calmly walk along with their backs to the horror behind them. I want to shout out and save them. Instead I keep my eyes on my real live tetris game, imagining just the shape of block that it would take to level it.

On my left I pass what appears to be an army recruitment center. There are large billboards with images of helicopters and battle tanks with captions like: ‘Join the army and be a hero for life.’ (ok, that isn’t it, but you get the picture) After being tempted to give it all in to play soldier soldier, I come to a small room in which a host of krishna (and other) idols and flowers and other gold bits and bobs sit. I wonder how this works. It looks like someone is sitting outside tending to the place. Perhaps you must pay to visit?

I hear the sound of electric bass guitar coming from the mall up ahead. A band of teenagers is singing bad rock music on a stage that seems set up for Saturday sessions of this kind. About 20 people are watching. This is my idea of a concert! It’s like being on the set of Idols auditions. A young teenage girl is singing about being in her room waiting for ‘him’ to call. She’s surrounded by angsty looking boys who strum violently at their instruments. They’re hot. She must be the talk of her school. I think I see her mom. She looks concerned – not because her daughter is singing bad rock music about boys, but that her other daughter might not have gotten it all on the small video camera that she is dangerously wielding.

Seriously doubting the fact that this is the MG Road that everyone talks about, I ask a nice lady who is waiting for the bus. She says that I have passed MG Road but that there is a great mall just up ahead for getting food. I forge on. The mall is just up ahead on the other side of the road. A zebra crossing lies across the road, but apparently zebra crossings in India are a little game of ‘how to trick the foreigner into believing that these symbols mean the same everywhere’. I make as if to start walking across the road, expecting the way to part for me like Moses parted the sea (it was Moses, right?) No one stops. In fact, they actually hoot at me! I stare indignantly and then beseechingly at the wall of traffic. After a while I realise that my blonde hair and pitiful stare are not going to work. I glance around me and try to work out how everyone else is getting across. Ah. This is how it goes. Lone travelers wait for a large enough group who want to cross the road to gather. Talk, handsome man confidently holds up his hand for the oncoming mass of traffic to halt, and people follow him as he bravely holds up the traffic for the few seconds it takes to cross. Just like Moses.

I’m in the mall and it’s crazy. There are a gazillion people here. There’s a Marks & Sparks; a Mango; a lady on a stage with a microphone selling insurance. Nice. I head up to the food court on the fourth floor and straight to what looks like the local Indian food joint. I don’t know what anything is, so I pick the ‘combo’ deal with aloo paneer (which I think means potato and cheese). After holding out my pale white hand with my receipt stupidly for a few minutes, my face lights up when the plate of food I was really hoping was mine is shoved into my gleeful hands. I rush a seat in the food court and tuck in to a plate with those cool little compartments. A dhal, a chickpea curry, a cucumber raita and four triangles of the most delicious fried naan-type bread stuffed with potato and paneer. Just the right amount of heat. Just the right flavors. Just the right combinations. I feel like I’ve died and gone to heaven.

As I eat, I’m starting to get a weird sensation from the people around me. No one is watching me! WTF?! I’m like the only blonde person I have seen in this place. I thought I’d be getting cat calls and propositions. It’s a relief… but also not.

I’m in such a good mood that I decide to splash out on a salwar suit. I go into a shop where there are many determined young women, opening up beautifully folded items of clothing and dropping them just as quickly. These gals know what they want. I look at a couple of the gazillion tops in as many colors and choose a pink short-sleeved top and black pants that look like they are made for a human-sized praying mantis. Apparently this is a salwar suit. I skip the try-on queue and purchase the goods. It feels good to be alive.

India. Baby. I love you.

I walk back along the way that I came, pausing only for a strawberry miracle smoothie and a smile from the gaggle that serve it to me.